The Word on Webcomics 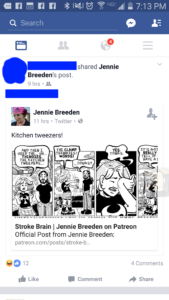 Or maybe you’re on Tumblr and find something like this:

No matter what you think about comics, whether you grew up reading the Sunday funnies or can’t stand the un-ending stream of Superhero movies, most of us see them every day.

But instead of heading down to the 5 and Dime corner store and buying a comic book issue with our saved up allowance money as we did in the “good old days”, most of us are now reading webcomics.

What are webcomics? Well a quick Google search will tell us that “webcomics are comics published on a website” (Source: Wikipedia). That seems simple enough, end of conversation, right?

While the content may be the same as if something was displayed in a print format, the internet provides an entirely different medium and form of communication for comic creators. For one, anyone can make a webcomic. There’s no publishers, or licensors, or skills you have to have to sit down and start creating.

A webcomic that copies the traditional newspaper-style of comics. Source: Sandra and Woo

This expands the possibilities and numbers of webcomics to an almost infinite amount. And there’s no set way of navigating all the webcomics currently in existence to find the perfect one for you. That’s not to say that attempts haven’t been made. But with the sheer volume of comics on the web in existence, there’s always going to be something missed.

Not that being missed is always a bad thing; anyone being able to make a webcomic also means that it’s available to everyone. Webcomics introduce immediate feedback to comic creation, for better or worse. “Everyone has an opinion” (Jennie Breeden) and is ready to jump on you with criticism or a red pen if you haven’t researched your topic thoroughly. It’s “that fear that keeps [you] from being too lazy”. “You will get trolls, it has nothing to do with you. They just need somewhere to rant and you happen to have the biggest soapbox” (Breeden). Most authors learn to not take it personally, and just look on those people with pity. However, there are others who choose to not even have a comments section, to avoid the risk of being worn down by their readers.

But not all feedback is bad, and with the instantaneous access of the web authors can receive the in-the-moment emotional reactions of their readers. In a webcomics panel at Dragoncon, Comfort Love (co-author of Rainbows in the Dark and Uniques) shared a story of a 4-in-the-morning email she received from one of her readers – “[She bought Rainbows in the Dark and had just come out the day before, and the story was so important and meaningful to her in that very moment.]” There’s a way to instantaneously connect with people and experience those first emotions they experience.

Webcomics represent an entirely new form of creating art and interacting with the world. They are the visual form of blogs, an instantly accessible idea and expression of thought. And the better we understand it the more creative we can be.