The Scoop on Social Media

What do you do when you wake up in the morning?

Get out of bed? Brush your teeth? Get dressed? Or do you check your phone? Or your Facebook? Or Twitter?

In our modern age, almost everyone has an account on some form of social media. It’s hard to get by without it – it’s how you connect with people, organize events, even how you find jobs. Everyone has to worry about their presence on social media, even webcomic artists.

With how much webcomics are seen on mediums other than their actual website (The Word on Webcomics), webcomic artists need to advertise on every possible form of social media to get attention. Since social media are inherently about sharing, they provide a uniquely effective way of getting your comic shared with the world.

However, letting your comic loose on free sharing forums runs its share of risks. Most importantly, not being credited. It’s the most common thing to happen to producers of content on the internet. If you don’t have a watermark/signature (and sometimes even if you do, because people will crop it out), your hard work is thrown out to the world without you getting a single bit of attention or revenue from it. And there’s no real way to police it. Authors will put their website addresses on the comic, tell people not to share without crediting/permission, even try and threaten audiences with copyright infringement, but it still happens.

The most prominent example of this is the “X all the Things” meme, which originated from Allie Brosh’s blog Hyperbole and a Half, and specifically her comic “This is why I’ll never be an adult“. 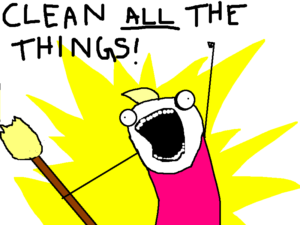 Source: Hyperbole and a Half

After this comic was published in 2010, the internet took hold of it and made it into a meme, one often repurposed to reference any number of fandoms or jokes. But throughout all these incarnations, no one thought to credit the original artist. In fact, if it weren’t for the fact that I read Hyperbole and a Half regularly, I would never have known that’s where it came from.

So even though social media of every form provides webcomics a great avenue of advertisement, it’s also often where authorship goes to die. Unless an artist is able to carefully police everywhere their content is shared and reproduced (on the Internet? I’d be impressed), they are in danger of having their content stolen, plagiarized, or just used without credit.

There are a lot of benefits to having the internet be free-use and open to everyone, there’s so much we can learn and see and use. But it also gives people almost open license to take the content they see and exploit it however they like. But before you worry too much, there are laws about Copyright on the Internet. 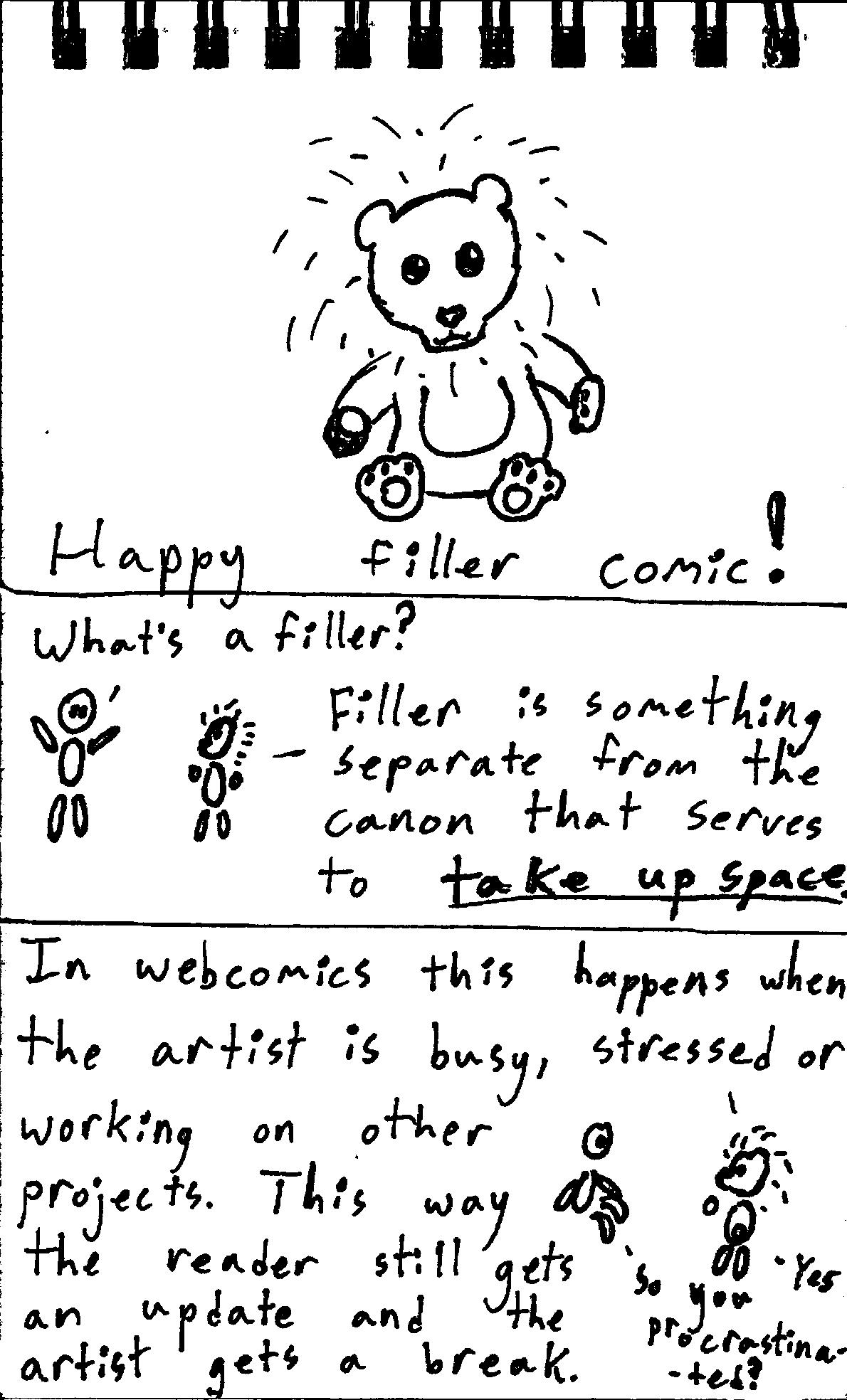 The Vastness of Virtual Space

The size of comics being published over the years has always followed a standard format. Whether it’s full pages of comic issues on an 8 1/2″ by 11″ page, or the newspaper comic strip . . . 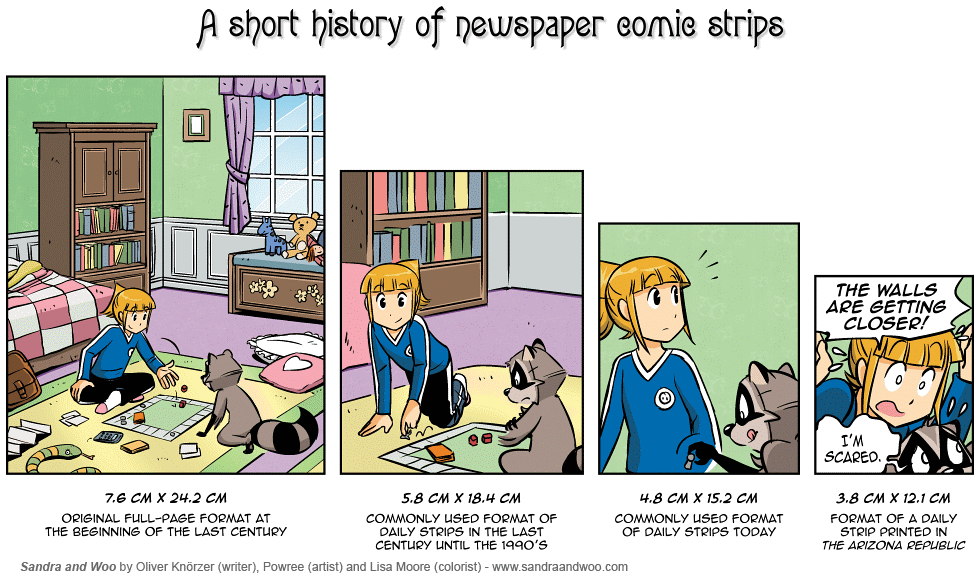 . . . Comics have always had a standard size and format to follow. At least, until they moved to the web.

Scott McCloud, author of “Understanding Comics”, is generally considered a pioneer in the realm of comic scholarship. He created one of the first official studies of how comics operate, why they appeal to us, and what they could mean in the future. And he did it all in comic form, employing the format in a way it had rarely been used before. After the success of his initial book, he wrote two sequels – Making Comics, and Reinventing Comics. In both books he delves further into the comic creation and the comic industry, including the possibilities of webcomics. He even has his own webcomic, which recreates his famous comic Zot! in a wholly unique format. As someone who wants to push the edge of comic storytelling, he has created his own take on using the web to expand the storyworld both visually and conceptually. In this page you see Zot and Jenny falling, and you have to scroll and scroll as it recreates the feeling of characters falling. A similar approach is used in the blog post popularized on Tumblr, “Do you love the color of the sky?“. One of the most impressive examples using the scrolling comic is To Be Continued, which shows new panels and events only as you scroll to them. McCloud takes advantage of this not only by having one continuous panel, but by having interlocking storylines with panels offset from each other and lines connecting each panel to the next. It’s similar to a mapping interface, and creates a form of cohesion and clear process of panels/events while immersing the reader into the comic.

Scrolling comics aren’t the only ones who challenge our traditional understanding of comic space. Xkcd is known for having a deceptively simple style of stick figures that the author uses to delve into complicated topics, or to highlight unexpectedly detailed drawings. A prime example of this is xkcd’s comic about how big the world is; which upon first glance looks like a normal comic. The only clue that you can explore the digital space is the title of the comic, Click and Drag. When you do this to the final panel you see all the space that exists “beyond” the square containing the comic. The artist has created a huge “world” that you can explore until you get tired of clicking and dragging – because it’s still only possible to see the drawing through the small square provided. This is an excellent tool for creating the illusion of more space, and for controlling where the reader looks without them realizing it. Another example of this is Hobo Lobo of Hamelin, which is also a scrolling comic but also reveals more of the world as you slide your computer screen to the left. It provides a clear direction for the reader and rewards them by creating the illusion of movement and revealing more of the story and characters.

There is an infinite amount of potential space on the web. As creators we’re all doing our best to fill it in the most unique ways possible.

Other webcomics that play with virtual space 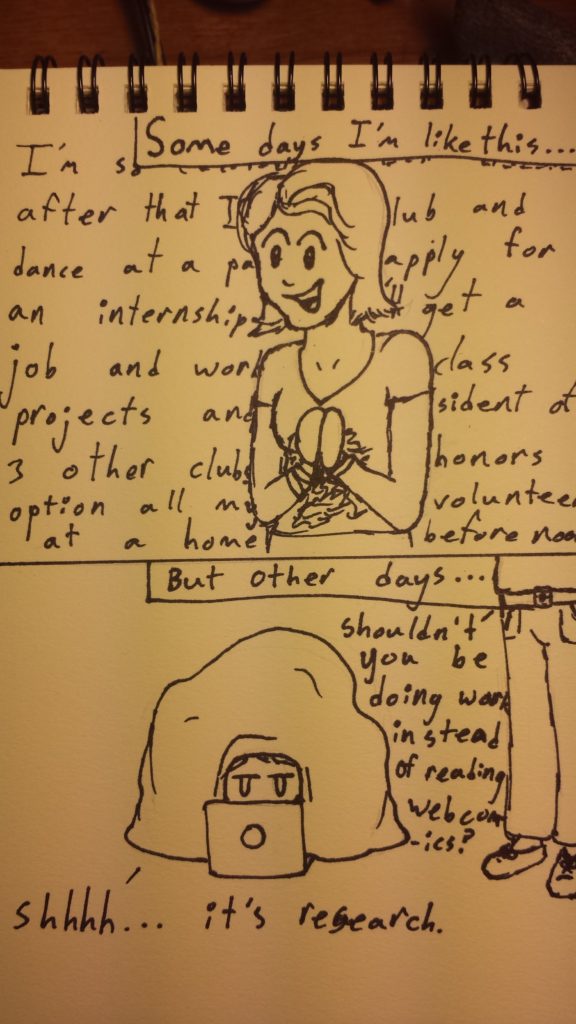 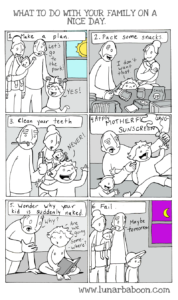 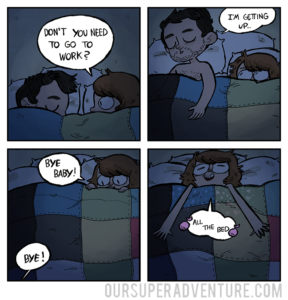 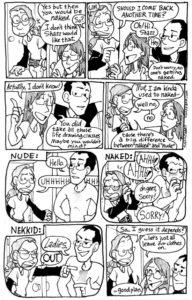