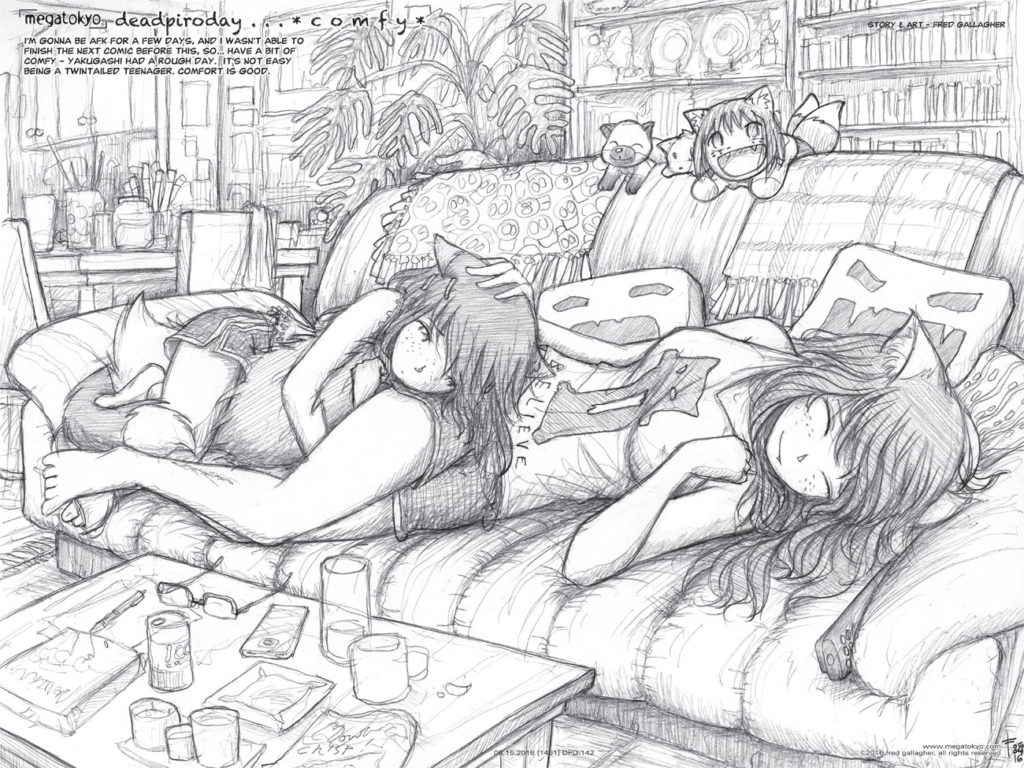 All comics have themes.

In order to have a successful comic you need to have a theme. It creates boundaries that you have to work within, which in turn allows you to be more creative and compelling. Garfield is about a fat cat and his owner, with other animal characters that communicate through thought bubbles. Calvin and Hobbes is about a young boy and his imaginary friend/stuffed animal Hobbes and their adventures together. Beetle Bailey is about a lazy soldier in the army and his strict and easily angered sergeant. When you break them down, these are all rather unusual story ideas to start with. Not everyone is going to be able to relate to being in the army, or owning a cat. But within these narrow themes, larger ideas and thoughts can be communicated. Calvin and Hobbes is known for being a startlingly insightful comic, and every reader can relate to the innocence and wonder shown in the comic. The characters in these comics echo sentiments we ourselves feel or can relate to in some way.

Some comics do this with a more direct approach, such as For Better or For Worse and Zits.

Source: For Better or For Worse

These two newspaper comics have both taken the approach of drawing/writing about family life, with all of its trials and tribulations. However, they took two very different approaches.

For Better or For Worse has characters that have grown throughout the years. It started in 1979 and had a family with babies, and then had those babies grow up and have kids of their own. After 29 years of continuous strips, the author retired from the daily production of strips. But because of how popular the comic strip and its characters were, all of the comics are being republished, through the newspaper format. There are a few minor changes or new strips, but for the most part fans are getting the opportunity to grow up with the characters all over again.

Zits on the other hand has a theme based on a high school teenager living with his parents. Because the theme is specifically about teenagers, the characters in the strip don’t age. The look of the comic sometimes does, and the content changes a bit to accommodate changes in the world (smartphones and other technology, as well as fad changes) or to advance the characters (his friend Hector growing facial hair, him dating Sara, etc.). But the content and theme of the strip don’t change, and so the comics remain fairly consistent and easy to pick up on any given day.

Webcomics function much the same way. They have a set theme that they start out with, whether that’s corrupted versions of care bears, evil scientists, superheroes, or college. But the major difference for webcomics is that most start with a specific story in mind for that theme. There’s a lot of variation within that, but because of the nature of webcomics, many authors are taking advantage of the format to create graphic novels online. 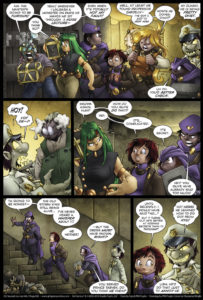 In this format, updates are published in the form of one page of a comic, rather than a self-contained joke. This can be both excellent and frustrating, as it is dependent on a consistent readerbase and regular updates. But it’s a very effective form of creating a graphic novel, because it establishes a fanbase before your comic is even published.

Ultimately, themes are the box within which you build your comic. Sometimes they expand beyond where you ever expected them to go, and others exactly follow the original plan of the theme and storyline. It’s impossible to predict where your story will take you.

If you open up a newspaper to find the funnies, there’s probably a few things you’re expecting.

Part of being a newspaper artist is having a comic that is completely consistent, that doesn’t change styles or content, so readers know what to expect and don’t have to keep up with it every week. They can just open up any newspaper and enjoy whatever content is there.

Webcomics function a little differently. While they can exist as a series of stand-alone comics, most take advantage of the existence of archives on the web to catalog their stories, develop their characters and change their art style. Bill Holbrook, author of Kevin and Kell, says that the reason he created Kevin and Kell as a webcomic (and currently the longest-running one), was to take advantage of the existence of archives to build longer narratives and more complicated storylines. Kevin and Kell also exists as a newspaper comic, but its primary publishing is through the web. 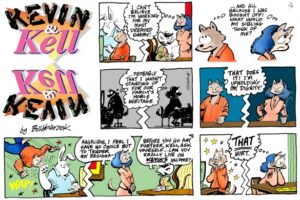 However, as with any aspect of the web, archives carry their cons as well as their pros. Many webcomic artists have changed their artistic style over time, or improved in artistic ability. And it can be painful to know that anytime someone new finds your comic, they immediately go to the “horror” that is your first art. And sometimes this will turn people off from the comic if they’re not a fan of the original art style. But it also means that the artist gets to experiment with their art style, and try new things over the series of the comic.

Say you don’t think your old content is professional enough. Or you want to redo it/publish it in a more professional fashion. Many webcomic artists will turn their comics into a series of graphic novels. It’s created a reverse from the old standard of regular comics being converted for the web. And it provides a unique challenge to artists, because many don’t start their comic with the possibility of printing in mind. So it’s a long process to go back through and re-format things, or re-organize daily/weekly content to be viewed all at once.

The archive also can be a dangerous pit to fall into for those artists whose style has changed over the years. It can be a very tempting thought to go back and redo your old comics to match your updated style and advanced art ability. But then your artistic ability advances even more and your style changes, and you have to redo them again. And again. And again. And pretty soon you’re never writing new content, just redoing the old over and over again.

The creation of social media meant that our past would never truly be private again. And the existence of archives means our artistic past never will either. But both show how much improvement can be made over time, and humanize the author of such content. We are all evolving, learning people, who make mistakes and go through terrible periods and learn from it. The comic Sinfest exists as an epitome of this. The author begins with fairly good art, and somewhat biased, inappropriate comics or jokes, that clearly show his worldview and sense of humor. But as the comic goes on, his art style begins to change, and with it his content. He goes from making jokes about a potential “matriarchy”, to creating a feminist resistance group within the comics that fights the patriarchy. A patriarchy that exists in a fashion similar to the matrix in coding people’s behavior and assumptions. His characters go through drastic reformation of thought and personality, and through the lens of his comic we see his own worldview changing. And it’s not something that could have been predicted or planned for, and it’s not something that could have happened in newspaper comics. It exists solely because of the nature of the webcomic.