The Intriguing Choices of Interactive Comics

You’re 7 years old. Your mom has gotten you one of those super cool “choose-your-own-adventure” books. You flip back and forth through the pages, going through every possible scenario and timeline, and you can’t help but wish there was an easier way to do it.

One of the most well-known webcomics on the internet is Homestuck, a webcomic by Andrew Hussie on the host website of MSPaint Adventures, about a group of teenagers playing a simulation computer game that causes catastrophic real-world events. It is a massively complex comic now, but it started as a choose-your-own-adventure style comic, very similar to the text-based game of Zork. Zork was an interactive fiction computer game, best known for the quote “it is pitch black. You are likely to be eaten by a grue.” It’s never fully explained what a grue is, but it nonetheless compels you to act in a certain way (light a match, nobody wants to get eaten!) Interactive Fiction comics act in much the same way, by providing set options or refusing certain commands. The author is still the ultimate controller of the story. However, this doesn’t prevent readers from having fun with the author or the author poking fun back, as with the continual joke of Andrew Hussie not drawing his characters with arms. 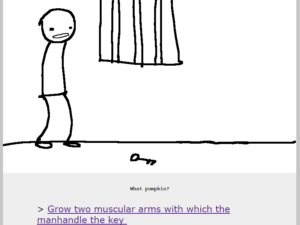 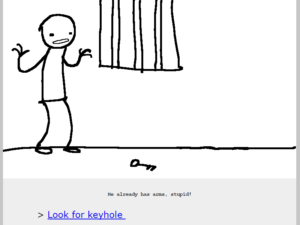 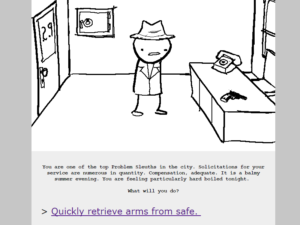 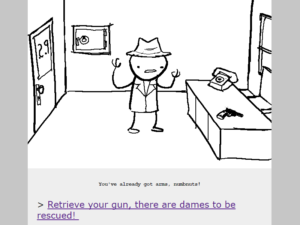 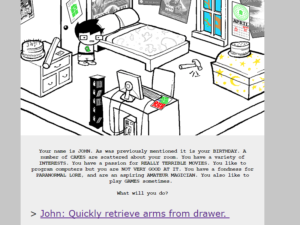 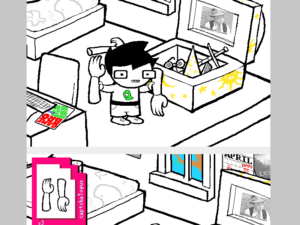 This interaction between audience and author is even closer for interactive fiction than it is for the normal webcomic. While every author is likely to receive audience story suggestions, few follow them – or even respond. In a traditional story writing format, it’d be rude to throw your suggestions at someone and expect them to take it. It’s like writing to J.K. Rowling and saying “yes I know you’ve already finished the story and that’s great, but I really wanted Draco and Harry to be in a gay relationship, can you change your existing canon to accommodate my fanfiction?” (yes I know Dumbledore is now gay). But with interactive fiction this response is practically invited. It’s like having a planning meeting for a TV show, where you may be the director/writer but you’re listening to others suggestions and responses and accepting the ones you like.

While there are interactive comics hosted on their own page like MSPaintAdventures, most are located on Tumblr or other forums. These are much easier for hosting, because of the forums’ quick response time and audience input, and the function of Tumblr’s question box for audience suggestions. Tumblr in particular has an entire community of ask blogs, usually based on existing franchises but with OCs (Original Characters) or unusual takes on existing characters ‘running’ the blog and answering questions. This puts whole new meaning to fans having control or influence over the storyline, because these fans have created their own canon and their own interactive universe.

Why isn’t interactive fiction more of a thing?

« The Horror of Hiatuses
Age-Accessible Art »